The father of this crèche family looks for work every day, offering himself for any labor a man can do, but in the economically depressed village of Porayar he is seldom successful.  He snares birds sometimes, both to sell and eat. His wife doesn’t work, nor does his mother, who lives with the family.  His three daughters are a burden, and having no son is a sorrow because a son’s wife would come to this family, while his daughters leave home to join their husbands’ families at marriage.   A grown son and his wife would be these parents’ hope for care in their old age, much as they are now caring for the father’s mother. 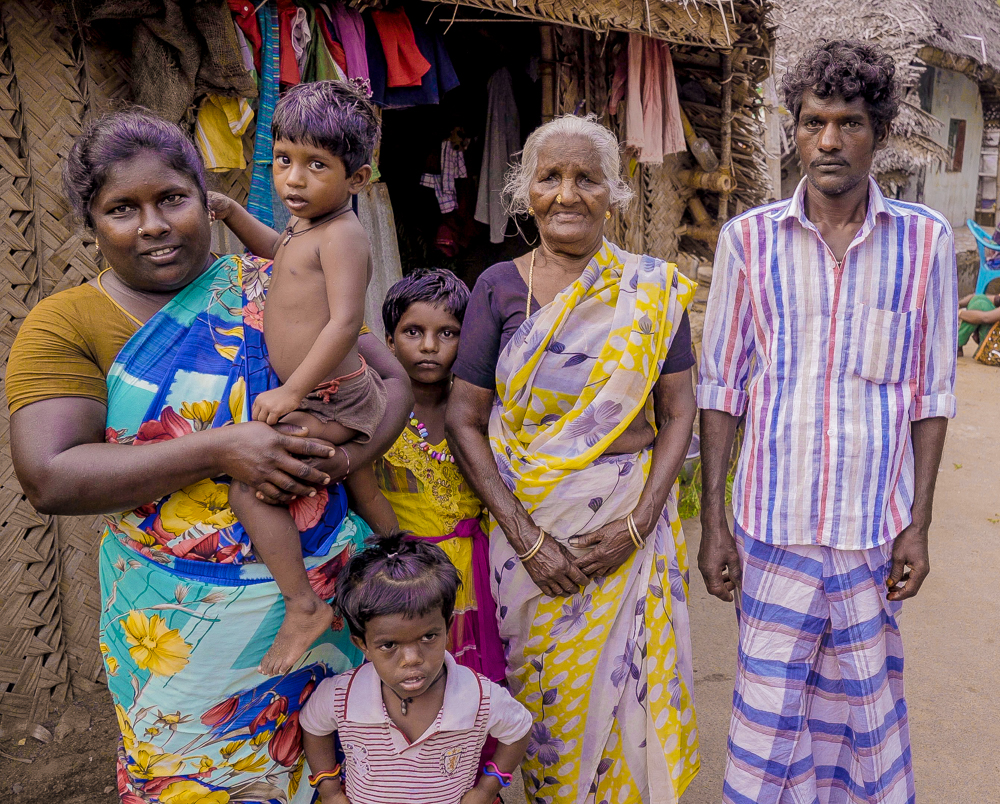 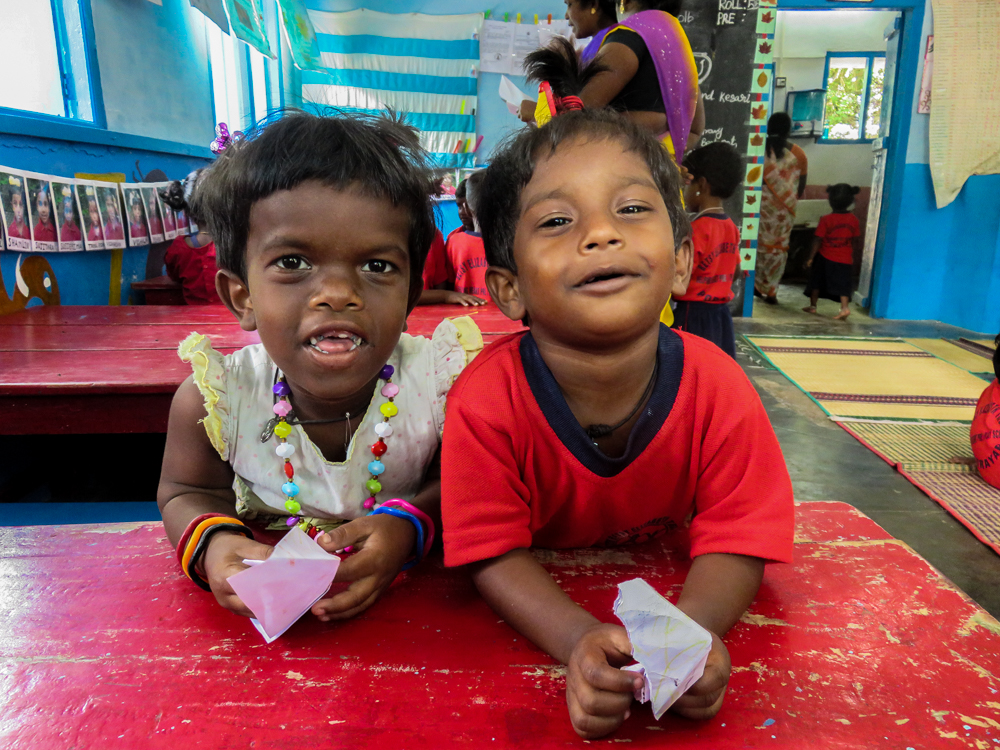 Hashini, three years old, is the youngest child.  She was born full term but weighed only 3 lbs. 5 oz. She was delivered at the little health center the creche’s sponsor in Porayar but remained weak and developed slowly.  She entered the crèche when she turned two. Her middle sister, Harini, 6, has dwarfism and is in government school. Harini is picked on quite a bit and likes to come to the crèche with Hashini, which no one minds.  Mrs. Hilda, the director of the crèches, has a plan for Harini to come and work at the creche when she grows up, thus helping her to find employment where other doors would be closed to her and to help her take care of her family.  The oldest sister, Leyal, 8, has a heart condition that limits what she can do.

The family’s house is made of thatched palm with a bamboo frame.   It has a dirt floor, a working light bulb, and no running water. They get by on government food rations, mostly rice.  At the crèche the older girls, by the time they were five, surpassed their parents’ education.  The family knows their girls have food at school, so the adults can eat the food they have. 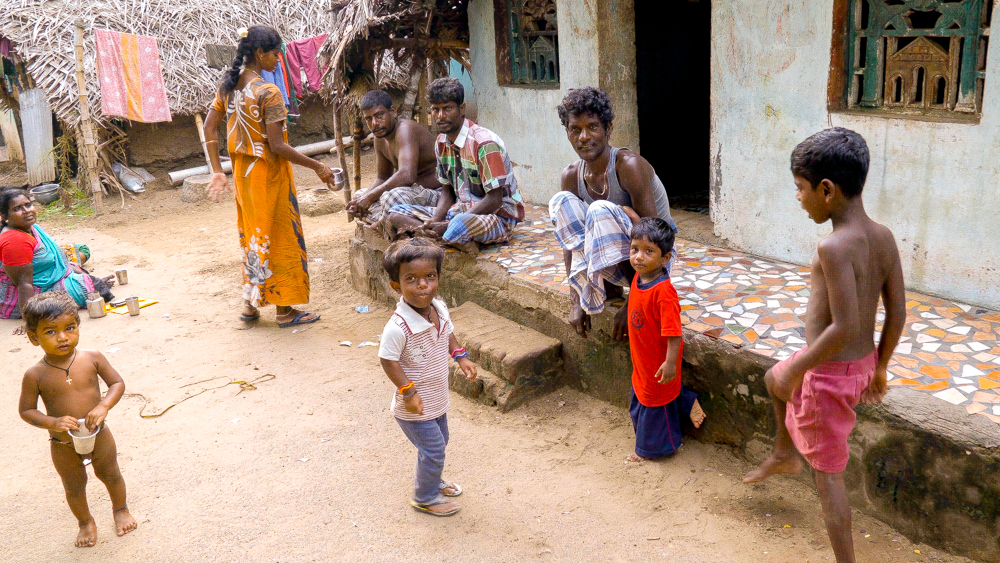 The sisters and their father visiting at the next door neighbors after school. 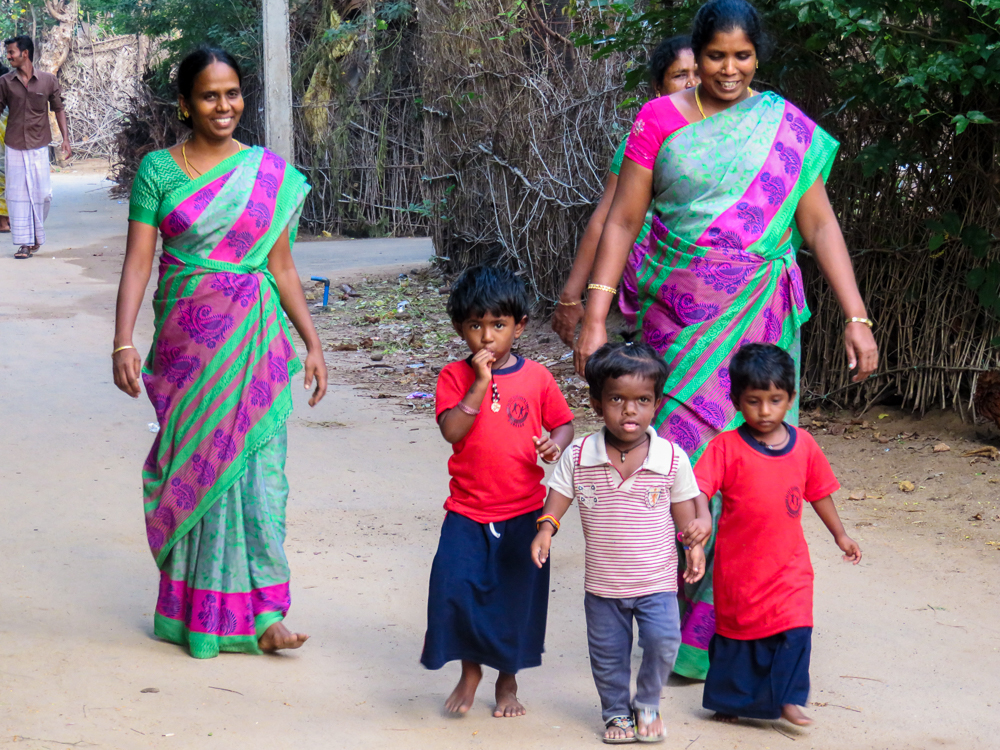 Crèche nurse Mrs. Regina (l) and head teacher Mrs. Jayanti meet the sisters and a friend walking to school. Hashini is very attached to Harini for security and comfort.

Hashini’s parents greeted her birth with some despair and found it hard to bond with the infant.  The crèche teachers have made Hashini a special case, knowing she needed stimulation, socialization, food and exercise.  Seeing the care given their child, her parents’ own appreciation for her grew. Hashini is gradually becoming more verbal,  active, and at times her slow start in life isn’t even apparent any more. She is slowly beginning to reach her potential, thanks to the care, patience, and faith of her teachers and her family.