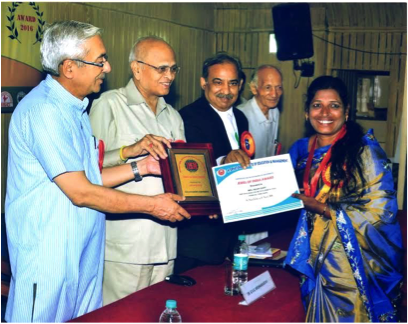 2016 National Mahila Rattan Gold Medal Award for women empowerment and social work; Indian Solidarity Council, New Delhi. The Jewel of India and Mahila Rattan Awards were presented by the Governor of Delhi, the Election Commissioner of India, and a judge of the Supreme Court of India in a ceremony in New Delhi on April 6.

2016 Jewel of India Award for exemplary service in social activities, child education and health care for the poor; International Institute of  Education and Management.

2016 Mother Theresa Award for outstanding achievements in children’s education and health services to the down-trodden people in rural areas in Porayar and Kodaikanal; National and International Compendium

2014 Nelson Mandela Award for service to the poor, received from the Thanjur district public president.