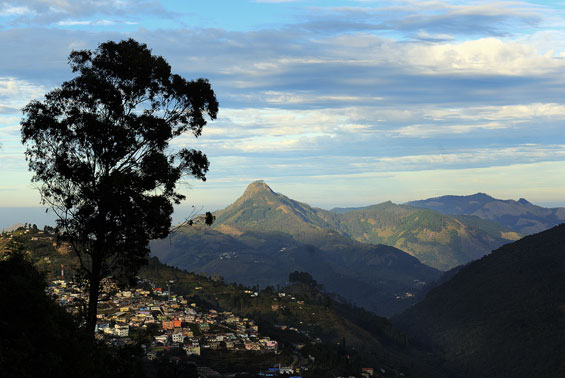 The town of Kodaikanal with Perumal Mountain 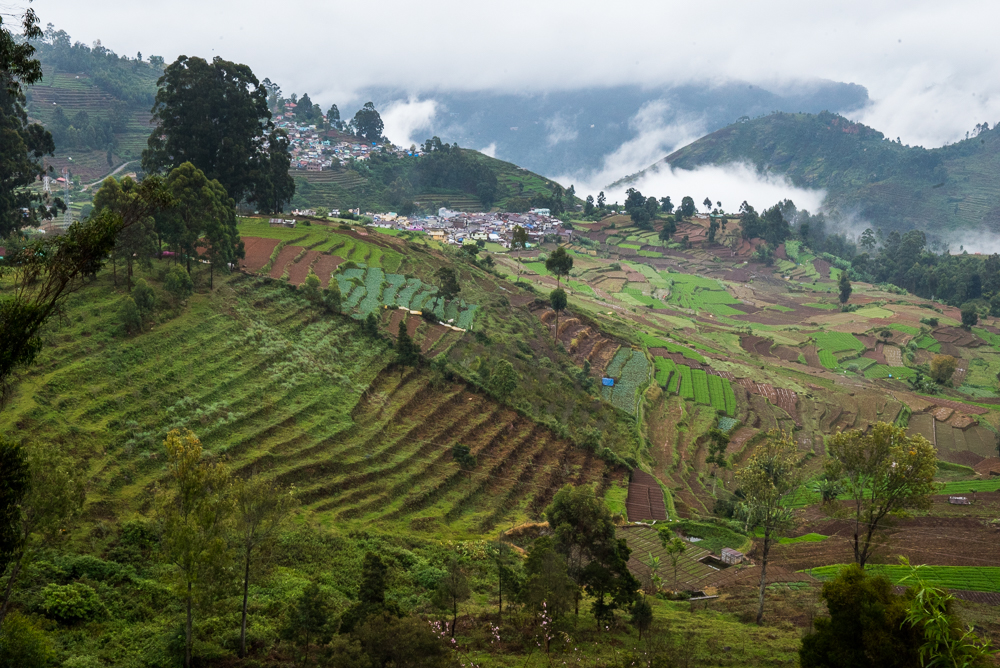 The Kodai preschools are in rural areas outside Kodaikanal.

Three of the BET crèches are within a half-hour drive of Kodaikanal, in more remote settings deep in the Palni Hills.  Kodaikanal:  “Jealously guarded like a prized jewel by the dark forests, is Kodaikanal.  In fact, the name itself means ‘gift of the forest’ in Tamil. Founded by American missionaries in 1845, Kodaikanal is steeped in history. In the early days, there were no roads: people had to travel by bullock-cart and palanquin, braving the dangers of the forests. Slowly Kodaikanal developed, missionaries established church properties, many of the then ruling princes built summer holiday-homes, clubs were opened, school and hotels were built, and civic amenities were introduced.”  India Post, March 30, 2012.

Kodai’s popularity pushed its native population to the margins. Illiterate and poor, they largely exist on temporary, poorly paid jobs and lack the funds and know-how to improve their lives. Their traditional culture is eroding; they live amidst those better off but lack the resources to enter that life. Alcoholism, depression,  and anger are common, much of it directed at women. The crèches are a strikingly bright spot in their often bleak lives, providing day care, nutrition, health care and education so parents can work and children can flourish. 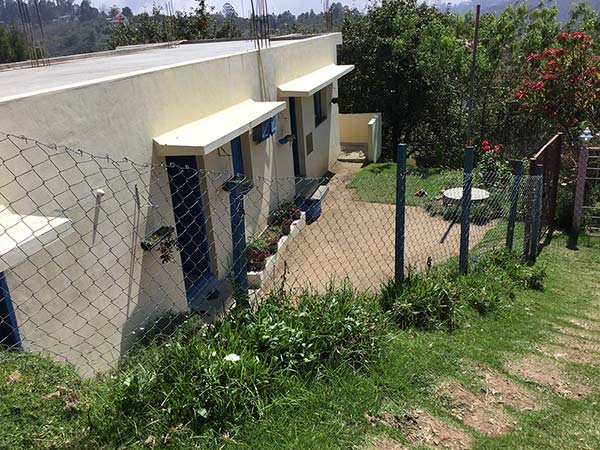 Founded in 1999, Grace Kids Center in Chellapuram village was the first Betsy Elizabeth Trust crèche. It was initially housed in a series of rented facilities. In 2006 the Seattle Chapter of Asha for Education became involved with Grace Kids Center, leading to the much anticipated opening of its own brick and tin-sheet roof facility on July 4, 2008. Asha continues to fully fund all operations at Grace Kids Center. In 2018 Asha completed another classroom, stabilized the play area on a terraced hill behind the crèche, and built an attached kitchen. 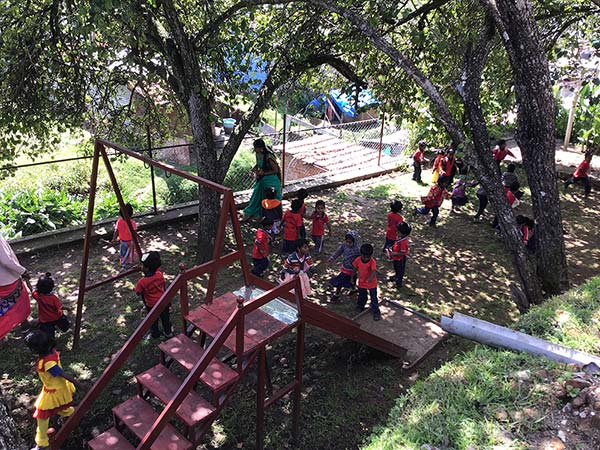 The sun-dappled playground is an irresistible draw on a rare sunny day during monsoon. 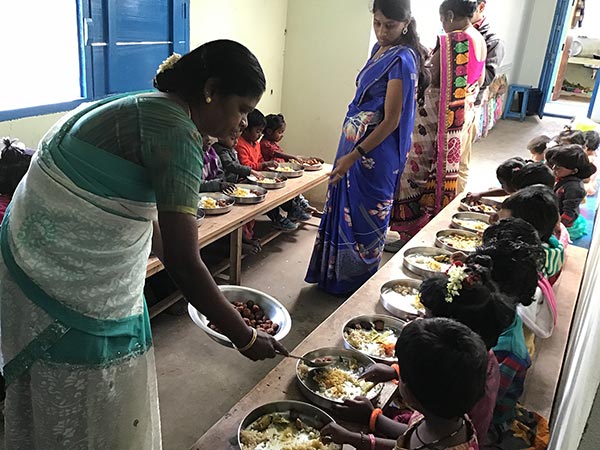 Lunch, the main meal of the day, is cooked fresh at the school. Teachers serve the children. 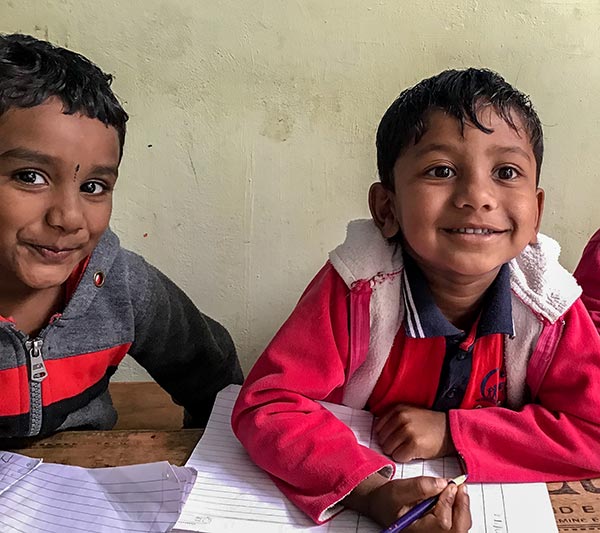 There is no kindergarten in this area so the preschools’ curriculum includes early literacy, math and science. Students learn both the Tamil and English alphabets. 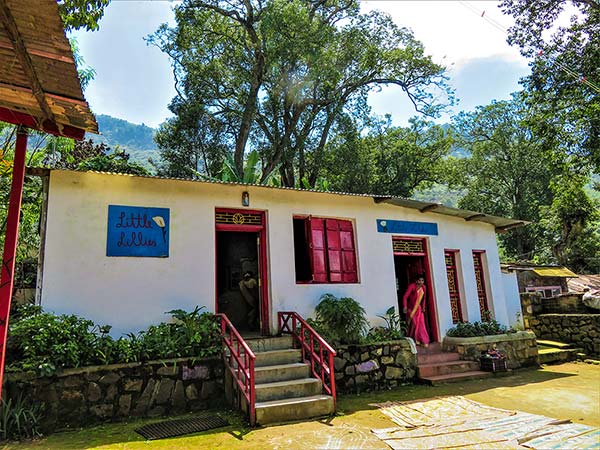 Little Lilies Preschool in Palangi village was founded by BET in 2002 with help from the students and staff of the International School of Geneva, Switzerland. In 2014, with help from the Rye Presbyterian Church in New York, BET purchased land and replaced a corrugated metal shed with a two classroom brick building, doubling the space for children. In November 2018 Cyclone Gaja caused extensive damage to the whole area and toppled the Little Lilies kitchen. A new up-to-code kitchen was built in 2019, thanks to HKI donors. Little Lilies is funded by Help Kids India. 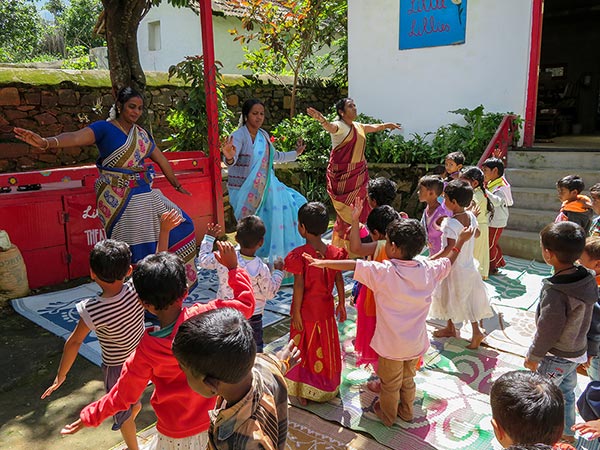 Yoga is practiced daily at the preschools. It helps the children’s flexibility, strength, coordination and body awareness–and improves their ability to concentrate and relax as they become more proficient. The staff enjoys it, too. 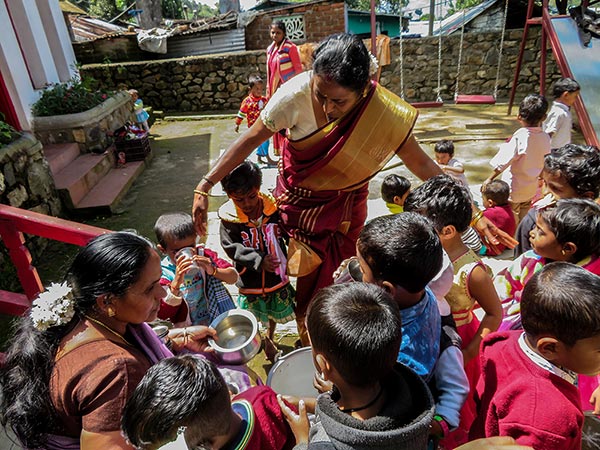 Head Teacher Dasi Rani brings the children to Milaga for a drink of filtered water. There is no potable water in the crèche villages so all the schools have water filters. 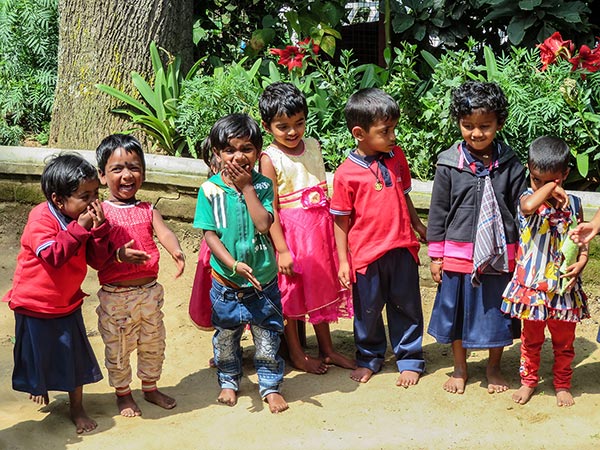 The kids share a good laugh during free play. At school children are able to relax from the stress of poverty and to enjoy their childhood. 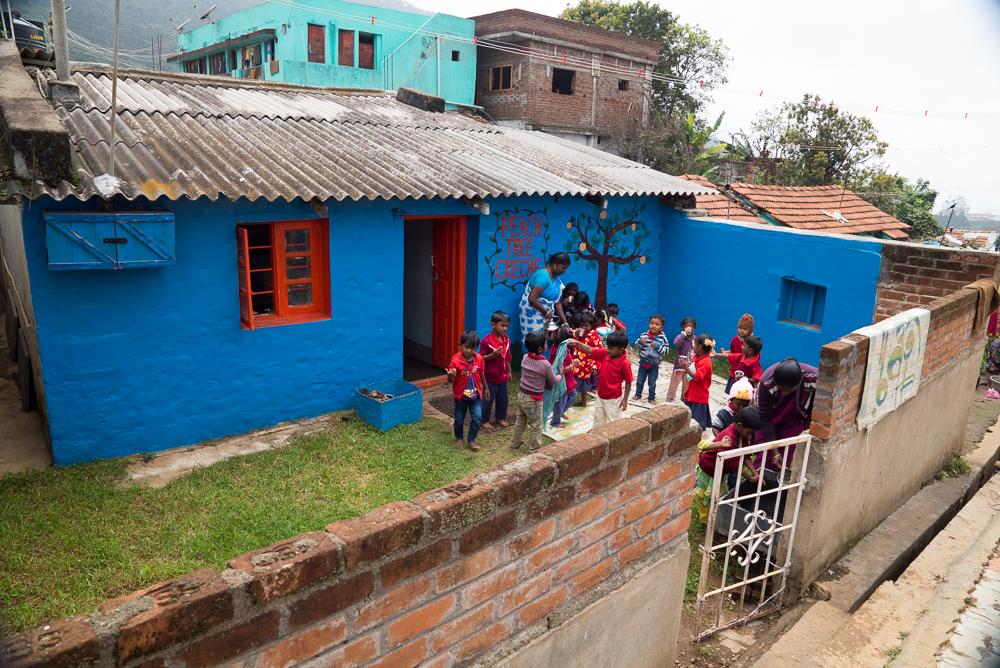 Founded in 2003, Peach Tree Preschool is in the small village of Attuvampatti.  Students from the International School of Geneva, Switzerland, helped to set up the crèche and student groups visit every year to do service projects and play with the children. The Geneva school fully supports Peach Tree. Peach Tree does not meet the government’s new space requirements  and is looking for a new home. 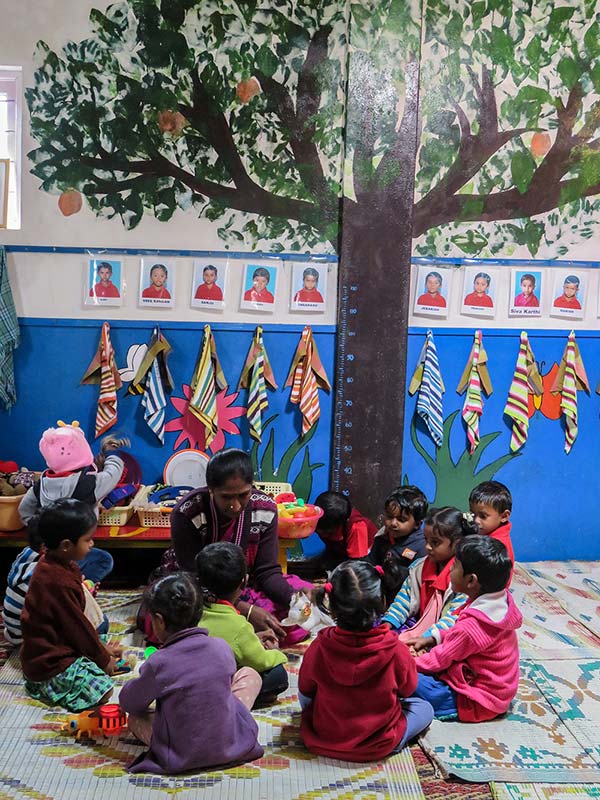 A lesson under the peach tree. Students from Switzerland repaint the wall art every year. 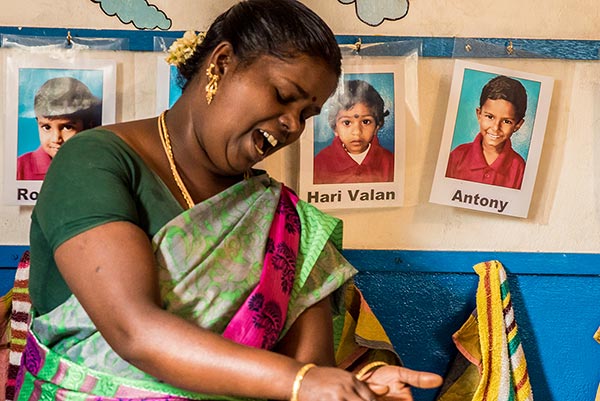 Assistant Teacher Selvakumari leads the children in acting out a story. 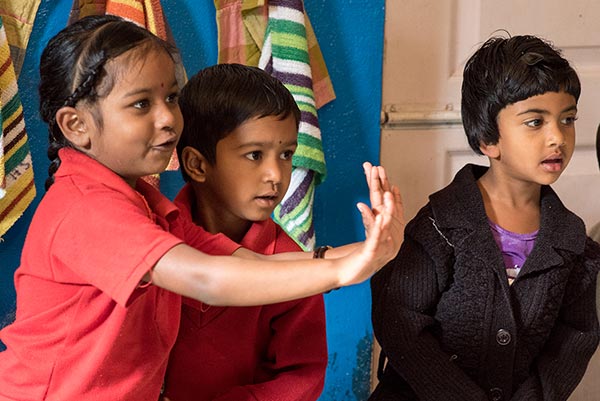 The children add their own dramatic flourishes to the stories. 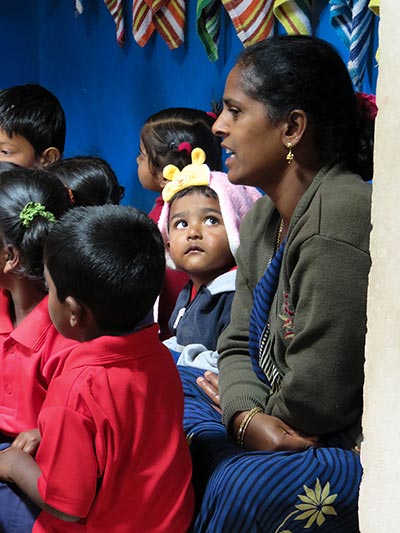 The youngest children at the crèches enter a world very foreign to them. They look to their teachers for reassurance and older children help them get familiar with school routine. 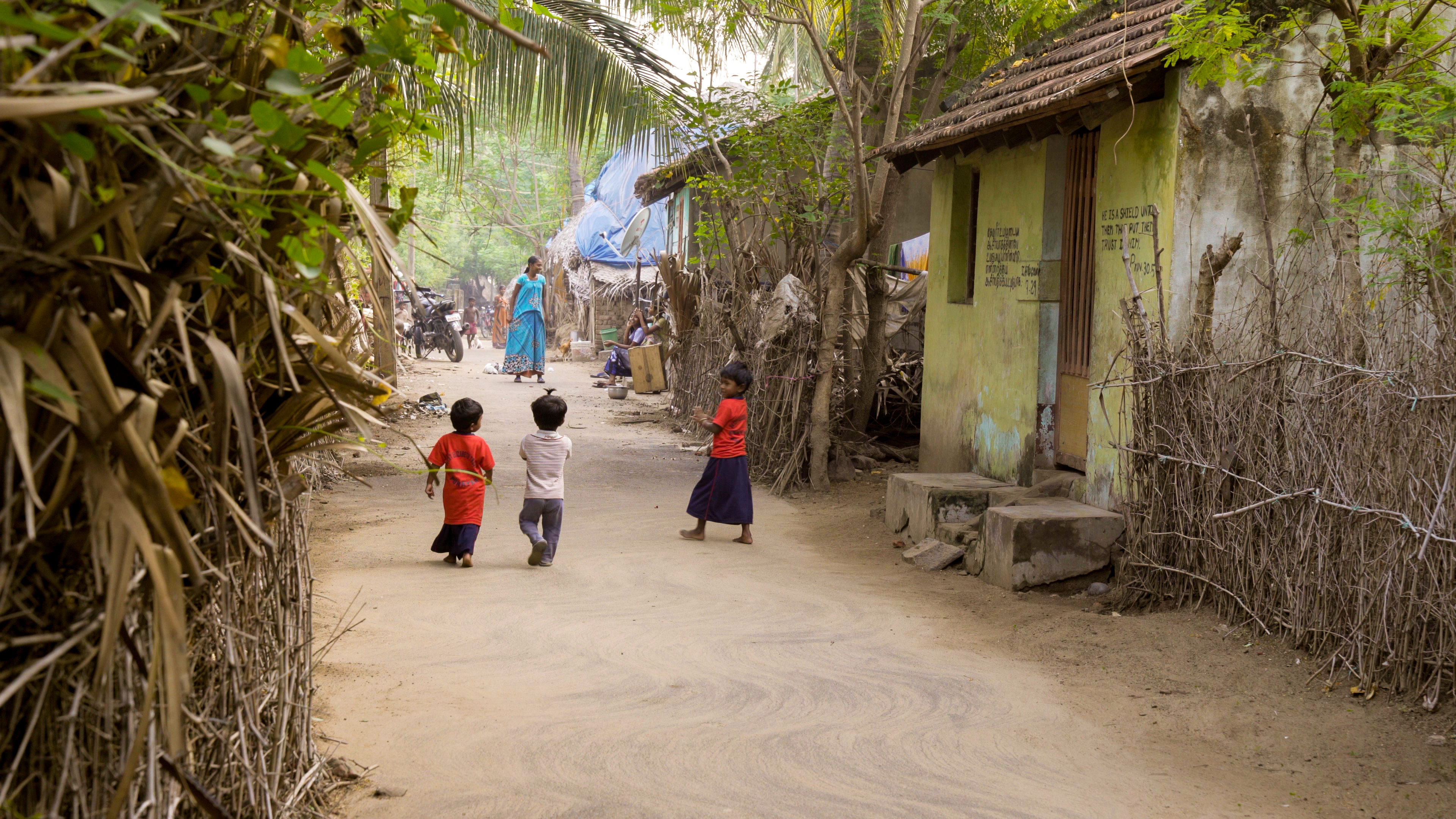 Porayar is tropical and lush. It’s also quiet, with little traffic on its swept dirt roads. Crèche children walk to and from school under their neighbors’ watchful eyes. 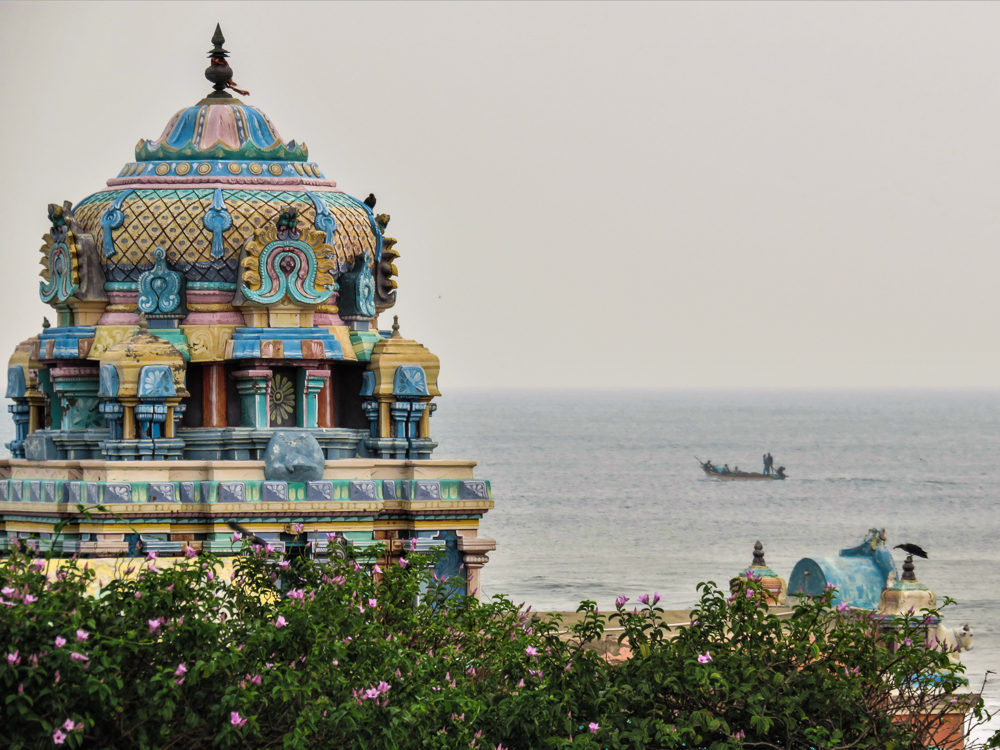 The oldest monument is a Shiva shore temple built in 1306. At that time ships from Tranquebar traded from China to Europe. Fishing, once a leading industry here, is suffering from depletion of fish. 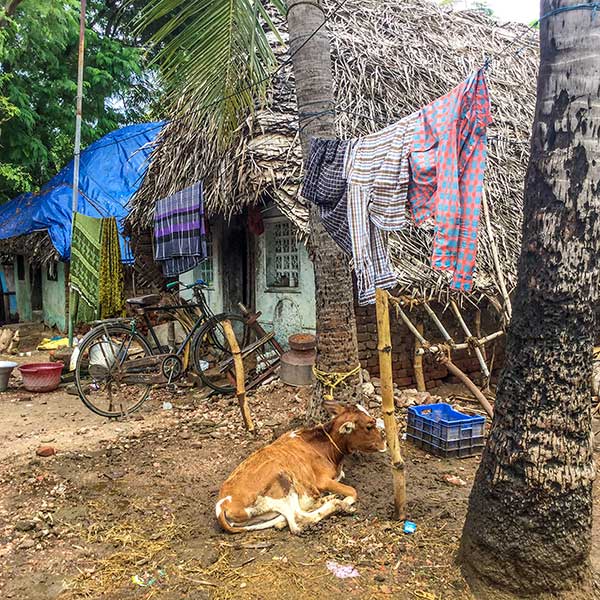 Creche families live in single room brick or bamboo and palm thatch huts, most with dirt floors. They may have an electric bulb for light but no homes have water and some lack latrines. Mothers cook on open fires indoors. 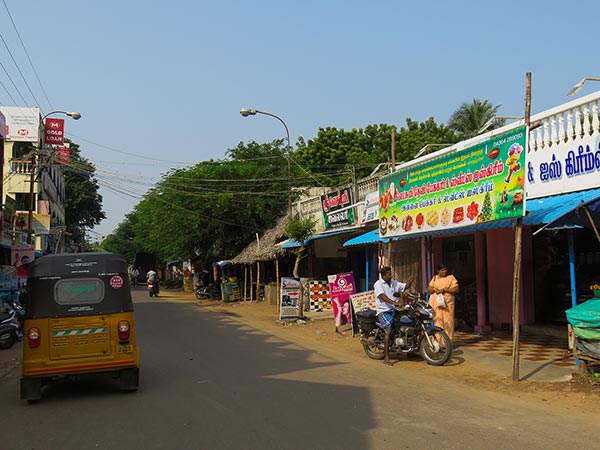 In the heat of the afternoon, the shopping area of Porayar is nearly deserted.

Porayar is a small town, 170 miles south of Channai (formerly Madras). Just inland from the sea, it is on India’s east coast. The administrative offices for area towns are in Porayar but there are no notable attractions, businesses, or cultural institutions. Porayar is adjacent to the larger town of Tharangambadi, “place of the singing waves” (formerly Tranquebar), a Danish colony from 1620-1845. Among the first Protestant missionaries to come to India were two Lutherans from Germany, who began work there in 1705.  Tharangambadi is now the home of the Tamil Lutheran Evangelical Church. A large Lutheran community still calls Porayar home and the area has a history of peaceful cooperation among its Hindu, Moslem, Catholic and Protestant communities. 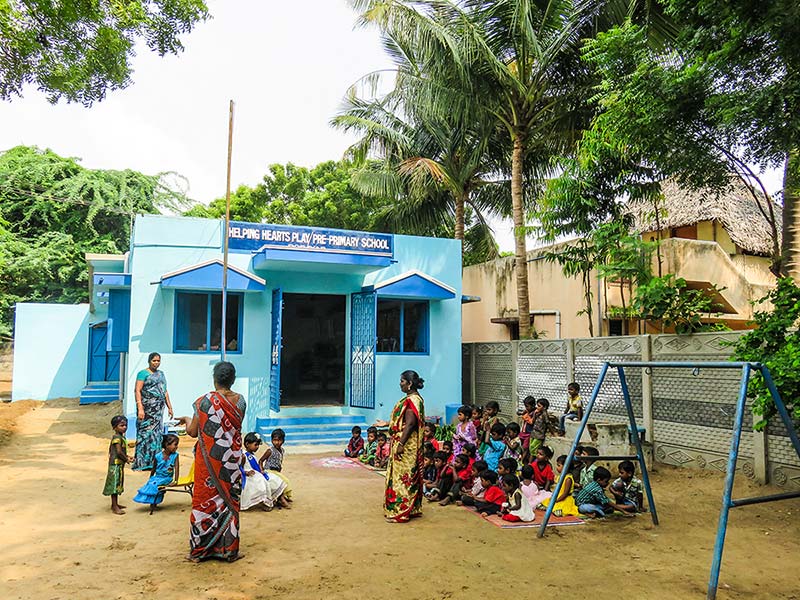 Most of the BET board members were raised in orphanages in Porayar. A good education was their path out of poverty and they are committed to providing the same care and opportunities for Porayar’s needy children. After opening in 2001, this much-improved new building opened in 2003. In an already marginalized community, many families suffered loss of homes, life, and livelihood in the 2004 Indian Ocean tsunami. Much of the area’s crop land was salinized and ocean water continues to seep into ground water. Climate change is making extreme heat, droughts, water shortages, and severe cyclones annual events.

A small health center sits next to Helping Hearts, serving the school and the adjacent community as well. The health center is funded by students from the St. Johnsbury Academy in Vermont, who traveled to India to build it themselves. Their fifth bi-annual service trip is in the spring of 2020. Help Kids India funds Helping Hearts Preschool. 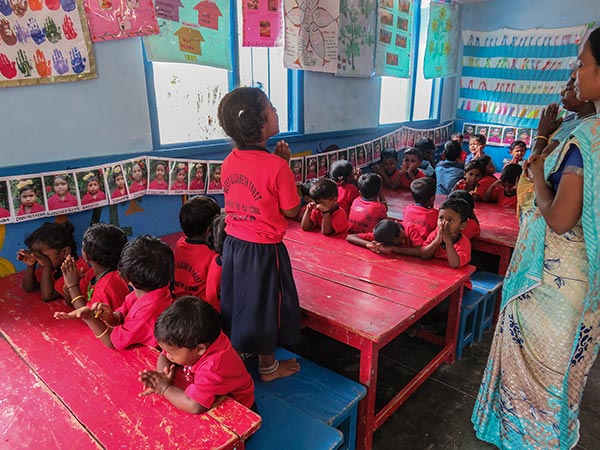 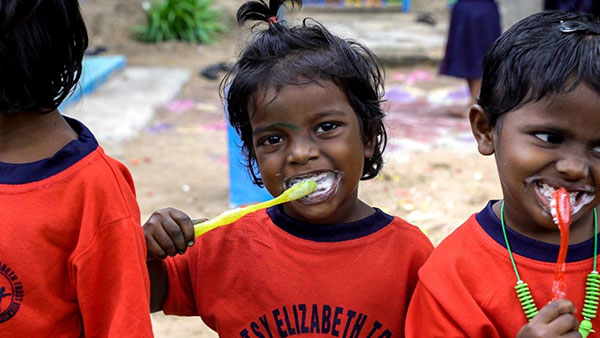 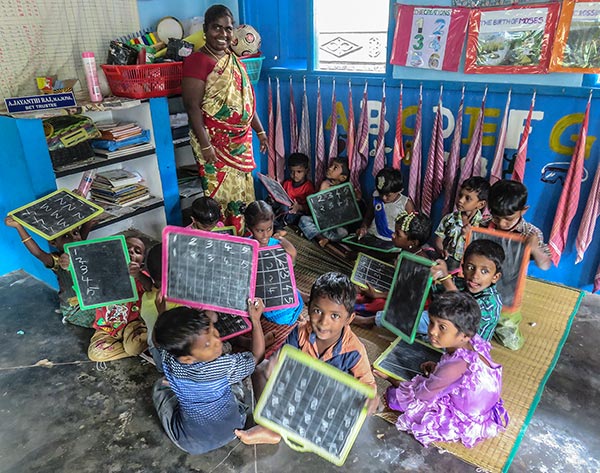 During academic time, children break into developmental age groups. They are eager to share what they’re learning. 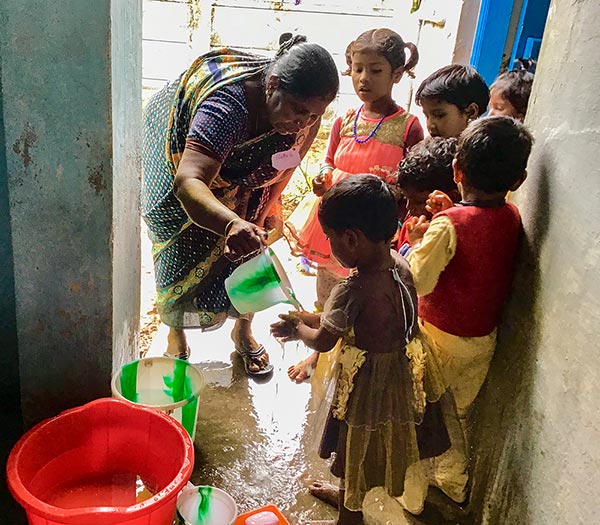 Washing 100 little hands takes little time with the help of a teacher and a bucket. 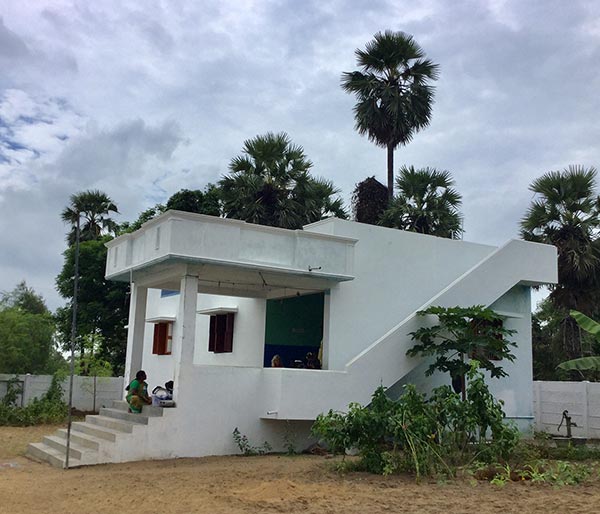 The Good Shepherd Preschool opened in 2010 and moved into its permanent home in 2015. The newest of the crèches, Good Shepherd has a generous playground, a garden,  and was specifically designed to be a crèche. Located outside of the town, the school is still waiting for a water hook-up and was connected to the power lines only in October 2019. Help Kids India supports the Good Shepherd Preschool. This crèche was able to take in 20 additional children following the flooding in December of 2015, thanks to a generous American donor.  Enrollment at Good Shepherd remains at 70. 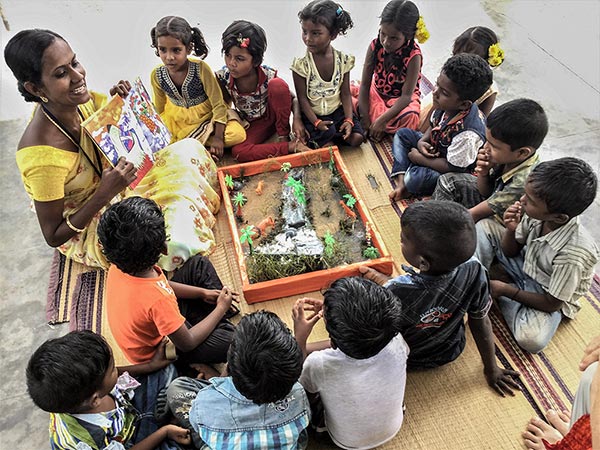 Sujitha, the head teacher at Good Shepherd, shares a story with her class. Teachers often augment their lessons with materials of their own making. 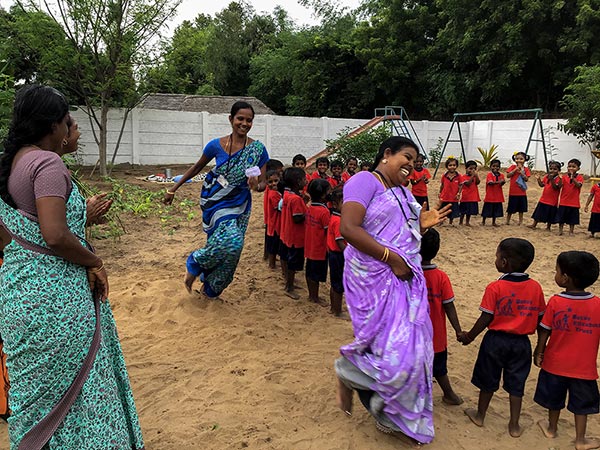 Duck, Duck, Goose is a favorite crèche game. Sometimes the staff takes a turn around the circle, to the delight of the children. 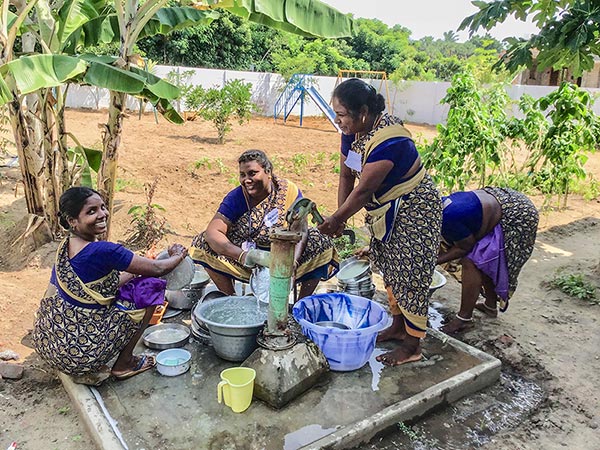 While students nap, staff wash dishes and do their planning. Most staff have been at their crèche since its beginning and have become as close as family to each other. 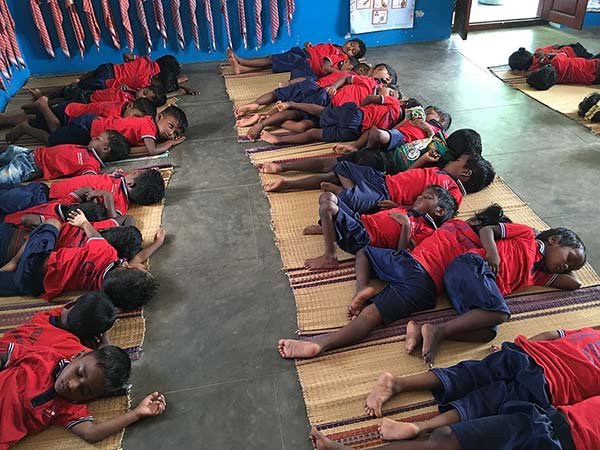 After a full morning and big lunch children settle down quickly for naptime on the cool cement floor. They will wake to a snack of fruit and still have time for outdoor play before the day is over.

Click here to see where the crèches are located in India.

Do you want to help or donate? Click Donate Today. Be sure to use the drop down menu to select Sponsor a Child or Preschool.  Find more information and how to connect with us to be a Volunteer.