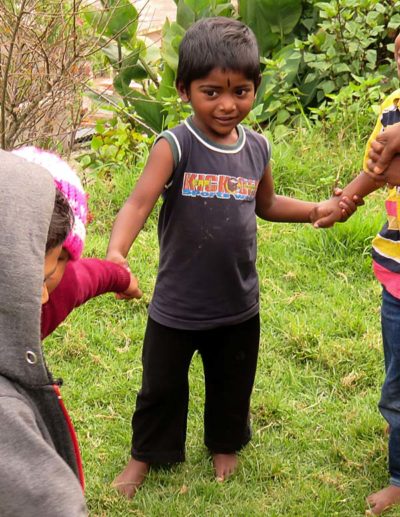 In the early 1990’s a small group of Indian women in Kodaikanal, all low caste and all poor, looked at their despairing community with hope and an eye for change. They saw poverty crushing its very spirit and those most affected were the little children. Neglected, hungry, often sick, failing in school, even in childhood they were defeated by poverty. But these women loved their children and saw in them the community’s best hope for a better future.

Hilda Isaac was one of this group. With a degree in early education, Hilda was the head teacher at a preschool for the poor started by Betsy Daily, an American teacher living in Kodai. Betsy’s model addressed a crushing need: a safe haven for children where they would be nurtured and educated, a crèche.

Hilda absorbed this vision and shared it with her friends. Against daunting challenges, they opened a little preschool on the outskirts of Kodai, seeking out children living in the most disadvantaged circumstances, and earning the trust of their parents. Those parents saw that their children were safe, had full nutrition and medical care, practiced hygiene, and learned. At school, children were leaving the stresses of poverty behind and relaxing into a real childhood of play, friends, creativity, and discovery. Older children could write their names, a signal milestone in illiterate households. And where jobs were scarce, the crèches employed local women in respected positions. A sisterhood developed among the staff. Hilda made service and love the cornerstones of the schools–touching the children, teachers, families, and communities.

By 1998 Hilda had three preschools in the Kodai area. The Betsy Elizabeth Trust (BET), an Indian non-profit, was founded to oversee them. By 2010 two more preschools were opened in Porayar, a small village on the Coromandel Coast, a day’s journey from Kodai.

As the projects grew, more support and funding were needed. In 2008 Help Kids India (HKI) was incorporated as a 501(c)(3), registered in Vermont. Ann Peck served as Executive Director for seven years, living half the year in Vermont and half in Kodaikanal. During those years HKI’s funding helped to purchase land, build schools, assist in day-to-day operations, share administrative costs, and establish the health and sewing centers.

BET was growing in strength and experience. In 2015 HKI transitioned from in-country support to a U.S. funding arm only, with BET taking over all management of the preschools. Our roles are separate, but we are united in commitment to the children of the poor. We are in close contact, including frequent visits, and enjoy full confidence in Hilda and the BET board’s ability to carry on the task with profound dedication and diligence.

HKI is committed to being an all-volunteer organization with no paid staff. The HKI Board covers all of its administrative expenses. 100% of donors’ contributions go directly to BET for the operating expenses of three BET preschools.

BET currently serves 270 children a year in five preschools. 35 employees are drawn from the local areas. Over the last 20 years thousands of children have graduated preschool and started their academic careers healthy, confident, focused, and eager to learn. As a group they are significantly ahead of their peers academically. They are completing high school and many are going on to college and trade schools. The majority stay in their own communities to help their parents and start their own families.

The women who worked at the creches, who were once voiceless and subject to patriarchal violence, caste-based discrimination, and economic dependency, grew along with the creches. At the preschools, they, too, learned — to speak out, lead, and become decision makers. They became strong, independent, socially conscious women.

It’s a long road to rise out of poverty. With faith in the children’s abilities, abiding hope for their future, and boundless love, Hilda and the village women are seeing their communities, generation by generation, waking to a brighter day. Help Kids India is grateful to be part of their journey.